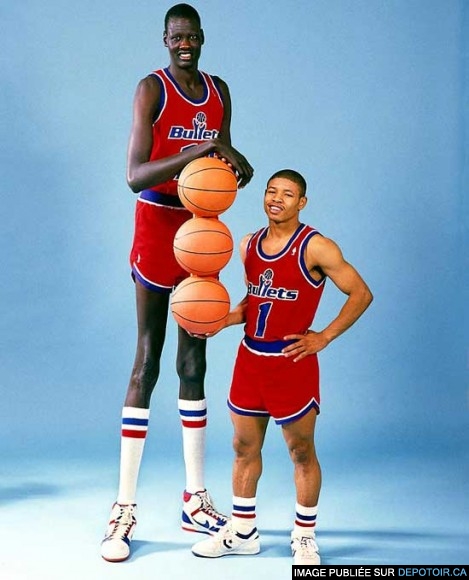 True or False: Half of All 7-Footers are in the NBA ?

The number of American men between the ages of 20 and 40 who are 7 feet or taller: fewer than 70 in all.

Even accounting for the typical 1-inch inflation in players’ listed heights would still mean that 15 “true” 7-footers made it to the NBA.

Some say that the NBA measures players for their listed heights with their shoes on.

The league’s median player last season was 6 feet 7 inches tall, and paid about $2.5 million for his service. But consider the rarified air of the 7-footer-and-up club. The average salary of those 35 NBA players: $6.1 million.

1979-80 is when the NBA introduced the three-point line. With players covering more space on the floor, teams may have felt a stronger need to have one big guy defending the basket.

At that point, we see an influx in little men about the same time we see the spike in big men.

As the table shows the average height for an NBA player went below 6"7 in 2006 and the two seasons from 2006-2008 are the seasons in which the NBA was at its smallest.

Personally, I'm not going to use the reduction in 1 or 2 inches on average to prove that the NBA has become "softer" than in the 80s or 90s